Imogen Dental in Benson’s and Kingsclere's High Street, are all smiling after winning a national award. They received a very special accolade of Dental Practice Decontamination Award UK 2021 at the recently-announced Dental Awards.

The dental awards spokesperson stated: “This was a very special award created to reflect the remarkable efforts that dental teams have had to go to so that they can ensure patient safety during the pandemic”

After presenting the award to Dr. Neel Tank, the spokes person continued: “Imogen dental were faced with total shut down at the start of the pandemic. They quickly realised it was vital to maintain communication with their patients and they did so by using social media, and even creating a short advise video for patients. When coming back after 3 months, Imogen Dental ensured full Covid protocols were implemented across the practices, so patients could be confident that safety was their number one priority. In addition to looking after their patients, the team at Imogen dental instigated a Covid team lead whose role was to look after the welfare of team members. What is clear, at the time of extreme uncertainty, Imogen dental really stepped up and this award is richly deserved. Congratulations to Imogen dental."

The prestigious award was presented virtually this year, with Imogen dental also receiving a Highly Commended awards for their website (www.imogendental.co.uk).

Imogen Dental, under the ownership of Dr. Neel Tank, have already achieved a great deal so far, before these latest awards, Imogen Dental had earned many plaudits for both their dental expertise, their charity work and Dr. Neel Tank appearance’s on BBC radio Oxford.

Oxfordshire and Berkshire based Imogen dental have grown from strength to strength and their nationally recognised accolades make them a well respected and a leading dental practice in the industry.

2019 May: Dental practice of the year 2019 - North/Central England at the Dental Awards 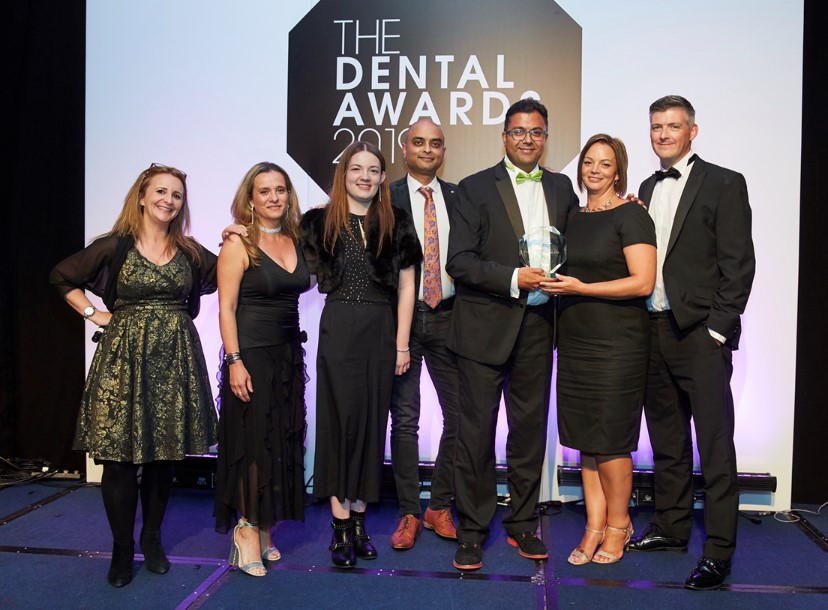 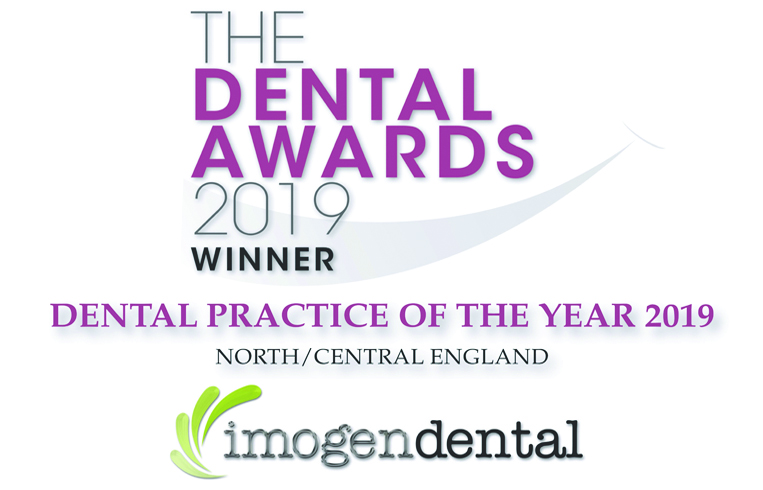 Imogen Dental (Benson) are delighted to be accepted by the British Dental Association as a Good Practice Member. This prestigious award, presented at the BDA headquarters in Wimpole Street, London by the President Dr Alasdair Miller highlights the dedicated team effort and their commitment to helping patients achieve and maintain excellent oral health.

Knowledge and education are essential to delivering quality dental care and we are continually striving to maintain this high professional standard fitting to this award. Being a Good Practice Member ensures that we can keep up to date in every area of dentistry allowing our patients to enjoy a stress free, safe and pleasant patient journey. 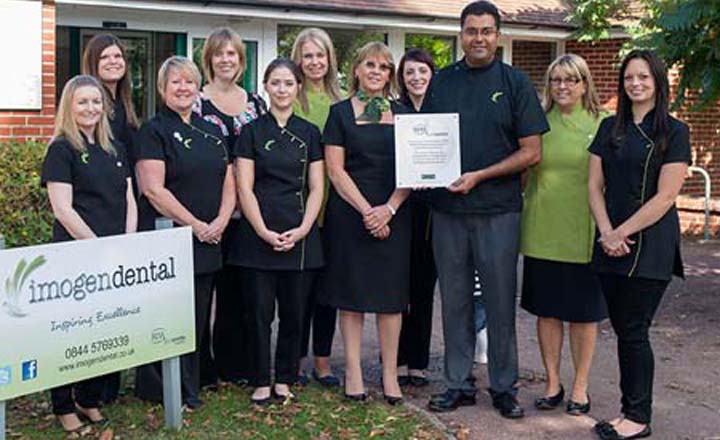 South of England's Dentist of the Year 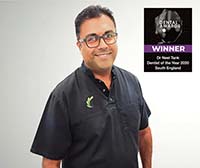 Dr Neel Tank, owner of Imogen Dental, has just bucked the bad news of 2020 trend, and been named as the South of England's Dentist of the Year in the recently announced Dental Awards.

The esteemed award was presented virtually this year, along with the accolade: "Neel goes far beyond his role as Principal Dentist, creating an environment where caring for patients, learning and improvement are second nature".

Both Neel and the Imogen Dental team have already achieved a great deal so far, not least their very recent total transformation of the Imogen Dental premises to comply with new COVID-19 regulations. But even before this latest award, Imogen Dental had earned many plaudits for their dental expertise and their charity work, proving their persistent hard work has paid off.

Practice Manager of the Year 2020 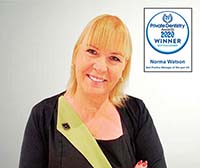 Unfortunately, due to COVID-19 we were unable to attend the distinguished event in London, however, Norma was still able to receive her award during the virtual award presentation.

After years and years of hard work, commitment, dedication and sacrifices Norma has deservingly earned this prestigious accolade.

South of England's Dentist of the Year 2020 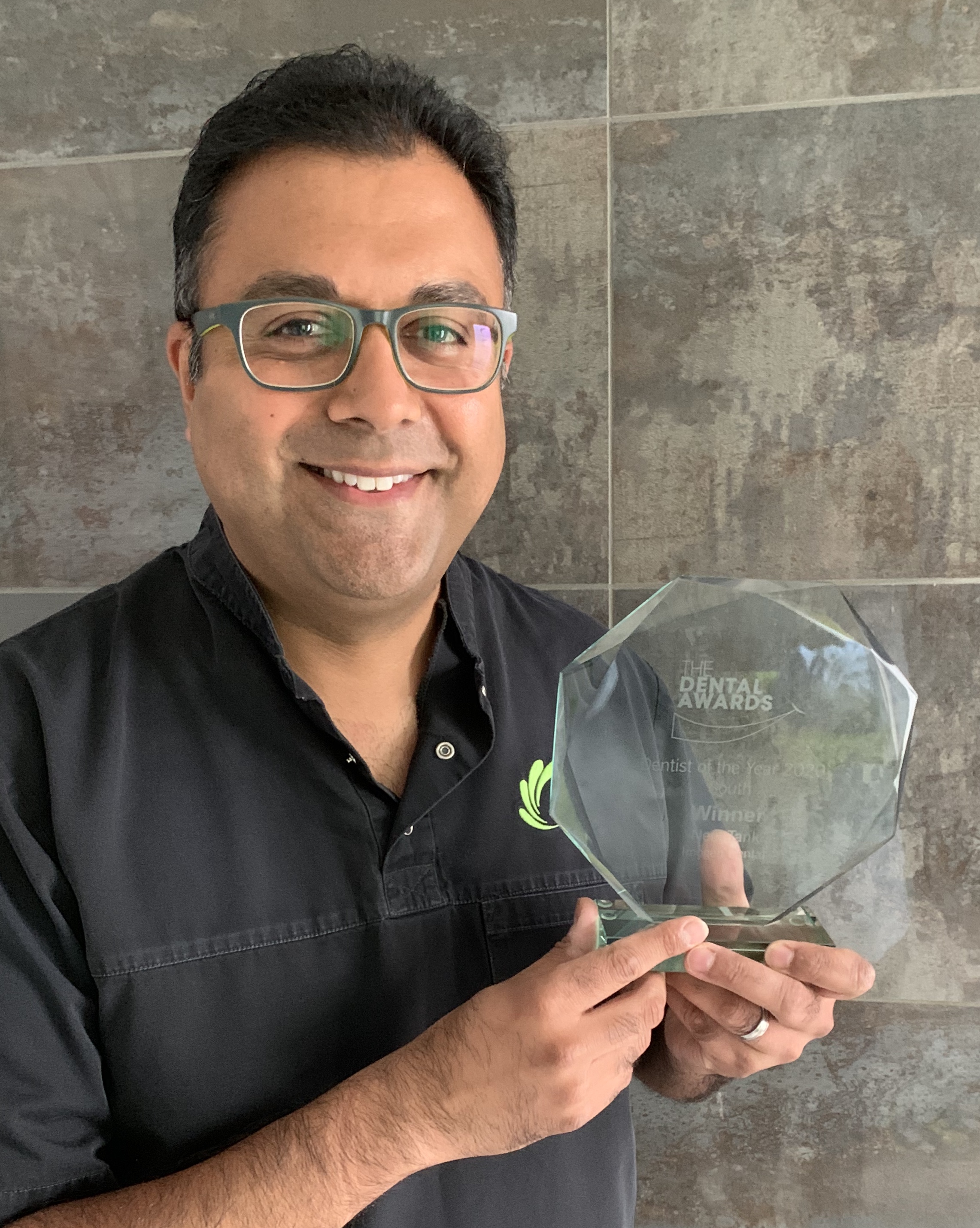 Neel Tank, owner of Imogen Dental in Benson's and Kingsclere's High Street, has just bucked the bad-news 2020 trend, and been named as the South of England's Dentist of the Year in the recently-announced Dental Awards. Read the full article

Imogen Dental, which has practices in Kingsclere (Berkshire) and Benson (Oxfordshire), has been presented with their 4th national Dental award in three years. The proud team were thrilled to be named "Dental Practice of the Year 2019 - North/Central England" at the prestigious Dental Awards ceremony held in Birmingham on 17th May 2019.

Owner and principal dentist Dr Neel Tank said "We are delighted. We have worked extremely hard over the years to provide our patients with the best possible care and experience. We also pride ourselves for all our charity work over the years. So to receive such a national accolade is an honour and an achievement we can be very proud of"

The team at Imogen Dental are ecstatic to announce that they have been awarded their second National Award.

The Dental Awards are the original and most respected awards programme in UK dentistry. For the past 19 years The Dental Awards have recognised the outstanding individuals and teams whose commitment to patient care and professional development continues to raise standards throughout the profession.

Imogen Dental attended the prestigious Dental Awards event which took place on Friday 18th May at the Hilton Birmingham Metropole, celebrating the hard work, commitment and passion of hundreds of dental professionals from across the UK

Having impressed the panel of judges, Imogen Dental, located in Benson & Kingsclere, won the title of "Dental Practice Team of the Year 2018 in the South of England"

The spectacular award was presented by comedian and entertainer Zoe Lions.

Dr. Neel Tank, Owner and Principal dentist commented "What a euphoric evening, I am thrilled that we have formally been recognised as Dental Practice Team of the Year 2018 in the South of England, making this our second National Award. The hard work, commitment and dedication from the whole team has been exceptional. I am delighted and very proud to announce that Imogen Dental is your local double award winning team!" 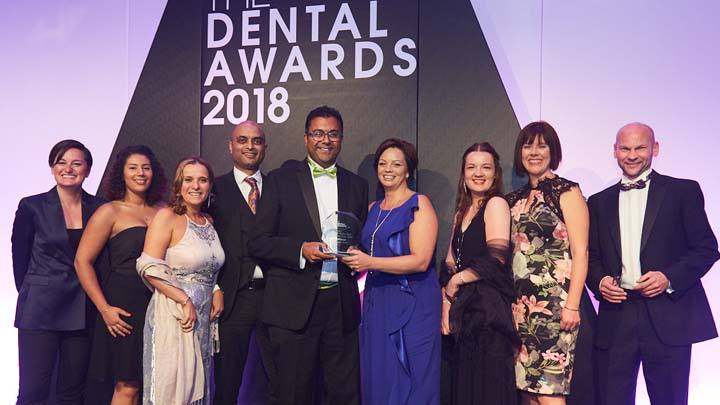 The proud team at Imogen Dental are celebrating after reaching the finals of the UK Dentistry Awards 2017 and then scooping the 'Best Team' award during the grand ceremony.

Held on 24th November 2017 at the impressive historical Athena in Leicester, the prestigious event provided an evening of glamour and excitement as the winners were announced. These awards formally recognise excellence in dentistry and the team at Imogen Dental were privileged to receive their well-deserved award.

Having impressed an esteemed panel of judges, Imogen Dental, located in Benson and Kingsclere, won the title of 'Best Team' in the South East of England.

Dr. Neel Tank, Owner and Principal Dentist commented "This is a fantastic achievement that we are all very proud of and is in recognition of all the hard work and dedication by the whole team over the past few years".

He went on to say "We are delighted to have developed an amazing team, a team that is not only passionate about the care they provide to patients but also all the charity work we carry out. We had an incredible night at the UK Dentistry Awards and I'm proud to say that we have formally been recognised as the Best Team in the South East!". 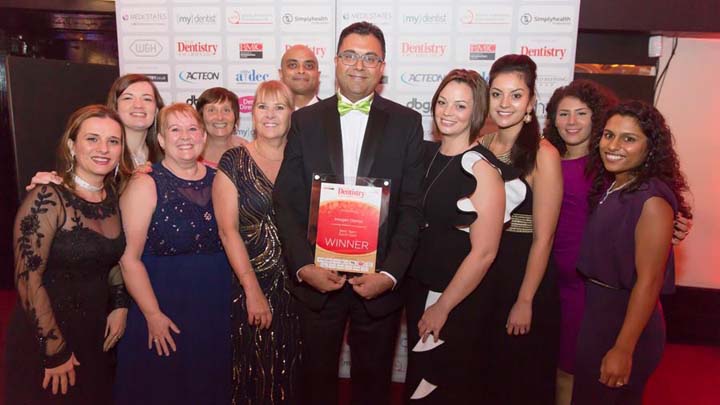